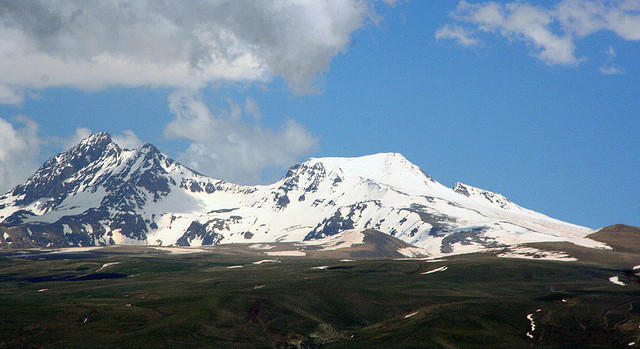 Formed by a volcano eruption in the distant past Mount Aragats is the highest peak in Armenia. It has four peaks the highest of which is the Northern with 4090 meters of height. Then come the Western peak (4080 meters), the Eastern (3916 meters) and the Southern (3879 meters).

Traces of ancient culture as well as an ancient irrigation system were discovered on the slopes of the mountain. Also, fish-like monuments known as “dragons” and symbolizing cult of water were found. The slopes of the mountain are also known for some of the remarkable structures of medieval Armenian architecture that have been retained throughout the centuries, among them are the Fortress of Amberd, Byurakan observatory and Tegher Monastery.

Three mountains can be found in the neighborhood of Mount Aragats; Mt. Shara (to the north), Mt. Ara (to the east) and the mountains of Great Arten (to the south-east).

The naming of the mountain is related to legendary Armenian hero Ara Geghetsik (Ara the Handsome). The roots of the naming are believed to be “Ara” (the name of the hero) and gah (meaning throne). Eventually, Aragats means the “Throne of Ara.”

The climate varies depending on the height; the higher you climb the colder the weather will be. In general, during summer-time the weather is moderately warm on the slopes, and cold in winters, while at peaks it might be really cold even during the summers. Note that the winters last long and are snowy with a steady snowpack of 250 days.

The landscapes also vary based on the height.

Hundreds of cool springs originate from the slopes of the mountain, which form the rivers of Kasagh, Gegharot, Amberd, Mantash, Geghadzor, Tsaghkahovit and so on. The springs coming out of the mountain’s slopes nourish the Lake of Metsamor located in Ararat plain.

The massif of Mount Aragats is rich in alpine meadows around which fragrant flowers are all scattered. Among them are violets, wild lilies, poppies and bell-flowers.

According to historians, Aragats used to be covered with exuberant forests where wild animals lived. At the height of 1800-2300 meters there is still a small forest. The main tree growing there is the Eastern oak. 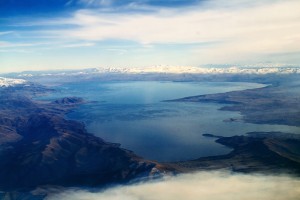