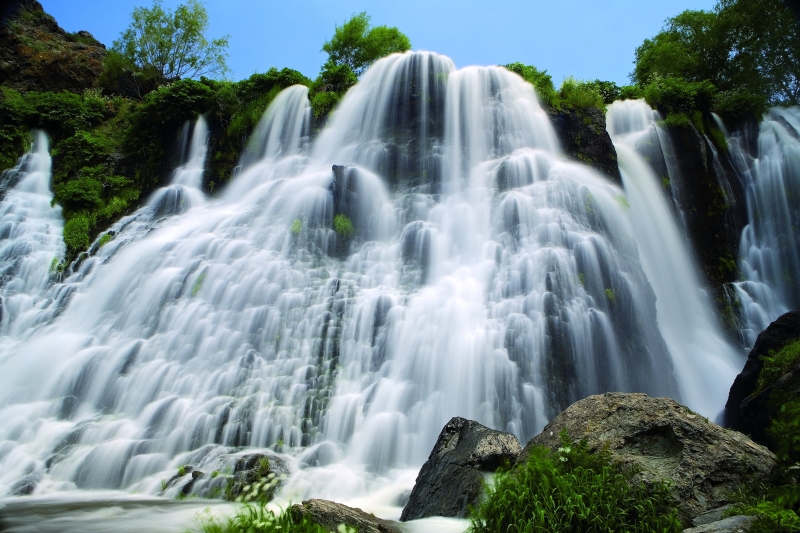 The arresting Waterfall of Shaki is located in Vorotan Canyon, in the province of Syunik. A bit straying from the topic, it should be said that Syunik province is one of the leading tourist destinations where some of the primary archaeological sites and sacred places can be found.

This waterfall more belongs to the fan type and is formed due to one of the smallest tributaries of Vorotan River. The water falls from a height of 40 meters.

The excavations held in and around the place the waterfall is formed have shown that the human development there bore unprecedented speed. The speed is so much unheard-of that people usually kid claiming the human evolution advanced there by micro steps. Also, the district of the waterfall is kind of an archaeological storeroom where over a dozen ancient grottoes are “stored.”

The essence of the district is so high that the international community suggested it be declared a forbidden zone. The findings in the area include remnants of ashes, which go back to the Stone Age.

What are legends? The shortest full description would be a legend is a narrative of human actions believed to have taken place in the past but which cannot be verified by historical record. It’s perhaps because of that verification that legends are usually being brought close to myths and fables. Anyway, it’s a personal decision whether to trust their truthfulness or not but one thing cannot be denied; legends are always interesting and a certain interest towards a particular place or thing generally grows higher when there is some legend regarding it. Spectacular Shaki Waterfall also has its legends, which are worth knowing, especially if you love enriching your knowledge with those impressive narratives.

Legend 1 – The first legend has it that a conqueror was captured by the beauty of Shaki and ordered her to present herself. Between choosing to be his or not, she chose the second and threw herself off of a high rock. It is believed that while she was falling her long dress opened and formed the waterfall, which was named after her.

Legend 2 – The second legend also includes the beautiful Armenian girl and the conqueror but with other development, yet the same ending. It is believed that enemies kidnapped 93 virgins from the province of Gugharkunik and sent them to their leader who was in the military camp set in Mughan. After the virgins reached the camp they were to be presented to the conqueror. The girls asked to be permitted to swim in the river in order to appropriately present themselves to him. They were allowed. The girls pulled down their clothes and getting into the water of Vorotan River disappeared. Blue-eyed Shaki was among those 93 virgins and after entering the water tried to escape the enemies. The enemies, however, managed to reach her but at that very moment a rock rose in the river and the water falling down from it hid the girl. Since then both the waterfall and the village where it is situated in were named Shaki.

Summing up it should be said that no matter how spectacular the visit to the waterfall promises to be, some two-hour stay will give you a thorough picture of the waterfall and the place. In this regard, your visit should be planned in advance. In this case, a visit to Shaki can be accompanied with the visit to a number of other things-to-see sites in particularly Syunik region. Among them might be Karahunj, which is a huge complex of Bronze Age megalithic structures, or Tatev Monastery, which will simply astound you with its structure, beauty and the view in and around the monastery. Besides that other places worth considering are the Devil’s Bridge, Zangezur Mountains and Vorotnaberd. 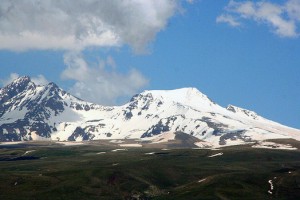