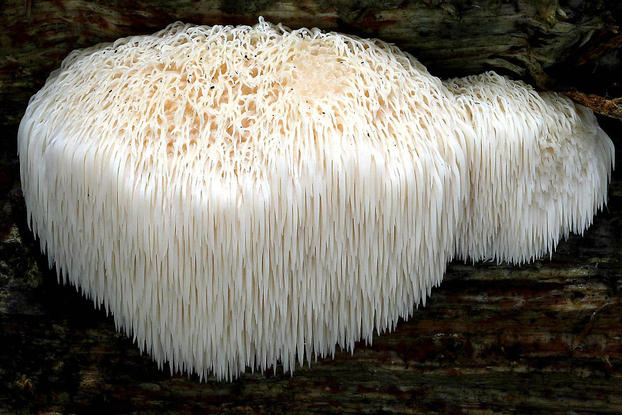 Brief description. Fruit bodies are annual, grow in large groups up to 25 cm across, sometimes longish set on short stipe or attached to the wood. When young they are white with pink colouring, globose or pear–shaped. The colour of the dry surface varies from yellow to brownish covered with rough, crooked and prickly appendix. Flesh is fresh, white, yellowish when dry. Hymenophore is spinulose. The prickles are long, white with pink colouring. When dry it is brownish, cylindrical, sharp, straight or crooked. Spores are 5–7 x 4,5–6 µm, wide ellipsoid or spherical with drop of oil.

Distribution. Generally in Europe, Asia, America, Southern Caucasus (Georgia, Armenia). It is widely spread in most European countries, but in Armenia it is rarely met, mainly in unique individuals. It is discovered in Ijevan floristic region – in "Dilijan" National Park and in Zangezur floristic region.

Ecological, biological and phytocenological peculiarities. In Armenia it is found in living stumps and trunks of oak and beech trees in broad– leaved forests, on the altitude of 1000–1400 m above sea level, from August to September. Xylotrophic fungi. Young fruit bodies are edible.

Nature conservation measures. In Armenia it is conserved in corresponding ecosystems of "Dilijan" National Park. It is necessary to carry out monitoring of the state of discovered populations and discovering new habitats as well. It is included in the list of macromycetes, which are guaranteed to be ratified by the Bern Convention.