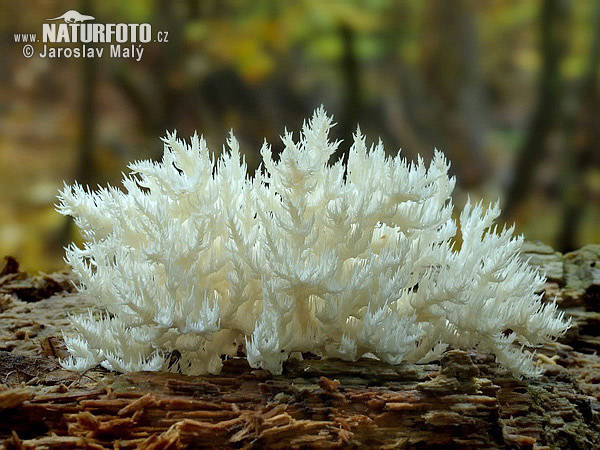 Brief description. Fruit bodies are 4–15 cm, when young white, pink, when mature yellowish, coral branched with thick stalky base, fleshy when fresh. Dry ones are crumbling. Flesh is white, filamentous with pleasant mushroom odour. Hymenophore is spinulose. The prickles are from 5 to 10 mm long, conical. The colour varies from white to light brown. Spores are 5–6,5 x 4,5–6 µm, smooth, broad ellipsoid or spherical, amyloid.

Ecological, biological and phytocenological peculiarities. In Armenia it is rarely met, mainly in unique large individuals on dead trunks and stumps of broad–leaved trees, in mountain belts on the altitude of 1800–2200 m above sea level, from August to November. Xylotrophic fungi, caused white rot. The fruit bodies are edible when young. It belongs to the decorative mushrooms. In some countries they are conserve in collections of mycelial cultures.

Main factors of endangering. Limited distribution, degradation and breakdown of ecosystems, degression of forest areas caused by uncontrolled felling. Collection of decorative fruit bodies is possible by the population.

Nature conservation measures. In Armenia it is conserved in corresponding ecosystems of "Dilijan" and "Sevan" National Parks. It is necessary to carry out monitoring of the state of discovered populations, discovery of new habitats, collecting and conserving mycelium cultures as well.