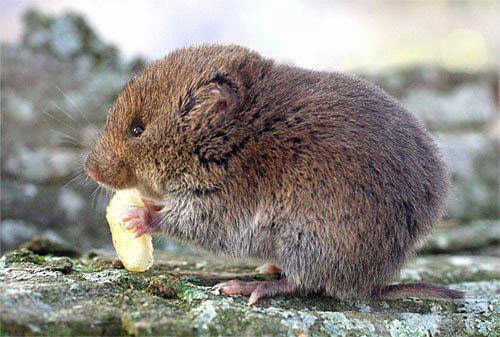 Status. An endemic species. Listed in the IUCN Red List of Threatened Species (ver. 3.1) as Least Concern. According to IUCN criteria categorized as Endangered EN B1ab(ii,iii,v).

Biological traits. This nominative species is slightly bigger than from Georgia. Visually very similar to the Günther’s vole living in Asia Minor. Lives in colonies. Burrows are simpler than in common and social voles. Feeds mainly on herbs and, on fields, also on cereals, technical and food crops. The reproductive cycle lasts, depends on spring weather, from late February to early April. The adult female can produce up to 4 litters per annum, on average, 7–8 offspring/litter. Juvenile females of the first generation can mate in the same season and produce up to 2 litters which are smaller than usual.

Population size and its trends. An endemic species of decreasing population. Since the late 1980s and especially early 1990s, the population has significantly reduced. Afterwards, only in 2003 the vole abundance has somewhere reached the long–term average population size. Some populations considered in the 1970s as stable (e.g., on the Mastarin Plateau) have virtually vanished.

Major threats. Human activities and climate change aggravated by strong rainfalls in early spring and subsequent droughts in summer affect the food base of pine voles.

Conservation measures. Not protected. It is essential to preserve the virgin lands.