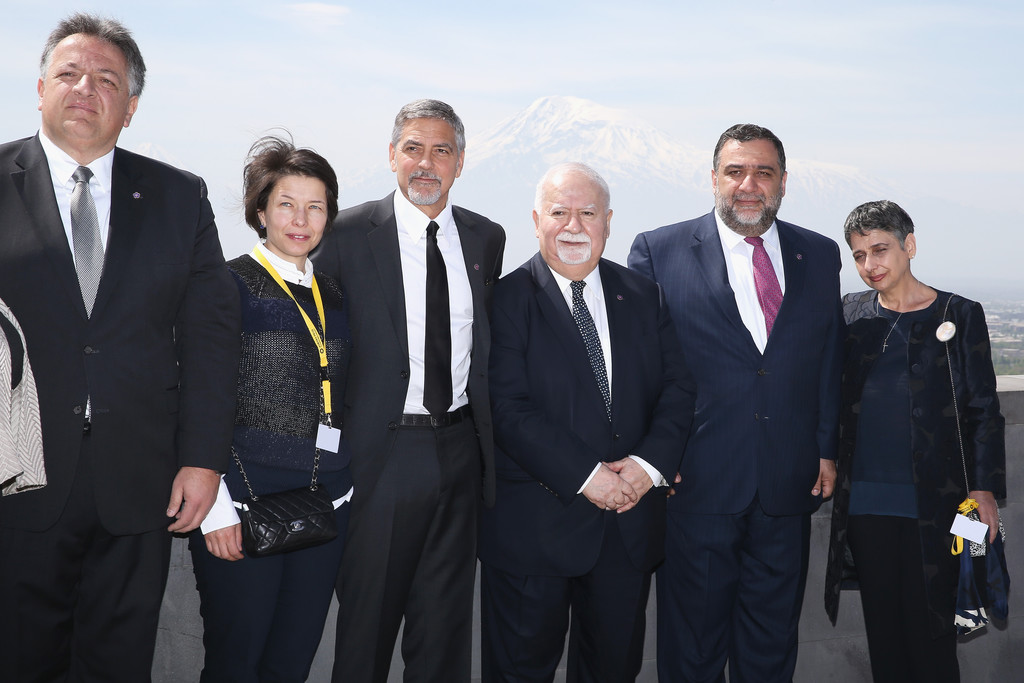 To the Founders of the Aurora Humanitarian Initiative

Members of Board of Directors of Ameriabank CJSC

Days ago we were surprised and disappointed to learn that Ameriabank CJSC signed a loan agreement with Lydian Armenia providing 24 million USD for gold extraction in Amulsar Mountain near Jermuk and for purchasing equipment for the construction of a heap leach facility.

This policy of Ameriabank came to strike our expectations and opinion about the bank. Firstly, because the bank advertises itself as responsible towards nature and humans and according to its website, it has an environmental and social risk management policy. Secondly, as members of the Board of Directors of the bank, you have become known in Armenia for your social, ecological, educational and charity projects, including the Aurora Humanitarian Initiative.

Both of you have lead “Armenia 2020” project, which never envisioned mining for the development of Armenia, nor did the “National Competitiveness Foundation” established with your participation in 2008 and annulled in 2014, which promoted the strategic direction of “Southern Corridor Tourism” development, including a long-term tourism development plan for Jermuk. Both the “Southern Corridor Tourism” development master plan, and “Jermuk Town Development” plan continue to be a state policy, which paradoxically are in the perspectives of the WB Development Assistance Agency’s lending policy for Armenia.

For 5 years environmentalists and independent experts in Armenia ring alarms and present facts regarding the unmanageable risks of gold extraction in Amulsar Mountain and application of sodium cyanide in this process, which can forever poison Vorotan and Arpa rivers, Vayots Dzor region’s agricultural lands and Armenia’s strategic water resource and the largest freshwater reserve in the region – Lake Sevan. Jermuk health resort town together with its mineral waters will also be under a serious threat.

Blinded with Ameriabank’s “green” image, a few weeks ago our civic initiative also opened a bank account there. However, like many other citizens, we too decided to boycott your bank after seeing that despite the problems raised, the bank continues defending this anti-ecological, anti-human and unethical loan deal. Bank staff members even dared to spread misinformation that the bank may reconsider its policy regarding this deal, or to lie to customers that Lydian is experienced in responsible mining (this company does not have any experience at all, it was established in 2005) and that the project entails no risks or else to stress that this project received loans from EBRD and IFC who have high standards thus this mining operation cannot be dangerous.

Such claims could be ridiculous and if one would only read the investigative article published by Huffington Post in April 2015 titled “Gold Rush. How the World Bank is Financing Environmental Destruction”, they would become aware, that these financial institutions do not apply “high standards”, that their lending and investment projects in mining in Latin American, African, Asian and former Soviet countries have already led to horrendous and irreparable environmental destruction and physical and economic resettlement of millions of people. Having served on the Economic Advisory Board of the IFC, Ruben Vardanyan must have known and must have made conclusions about this.

We are puzzled by this controversy in your activities, namely how you can initiate humanitarian projects in Armenia on the one hand and speak about Armenia’s long-term social and economic development, and on the other hand finance such a short-term project that threatens Armenia’s ecology.

Lydian’s arguments that its project is in line with international standards have long been refuted. It is two years that IFC Compliance Advisory Obmudsman’s office is assessing complaints from Armenia that mining in Amulsar does not comply even with IFC standards. Armenia’s government has no clear answers regarding very basic questions on risk management and has held no real professional assessment of mining in Amulsar Mountain (see “Ecolur” environmental information NGO’s “Four Questions to the Government on Jermuk” here and Pan-Armenian Environmental Front’s “Amulsar: Questions to the Government” here).

Given the above-mentioned facts, as well as principles declared by projects and institutions led by you in the present and in the past, also given your direct responsibility in the possible exploitation of Amulsar, please explain to us and the general public these contradictions in your actions.

We hope that your personal reputation and the one of institutions led by you matter to you so much that you will not leave this letter to the fate of our previous open letter sent to “My Armenia” project of the Smithsonian Center and AGBU. The latter simply ignored the letter. We expect your clear position on this problem.