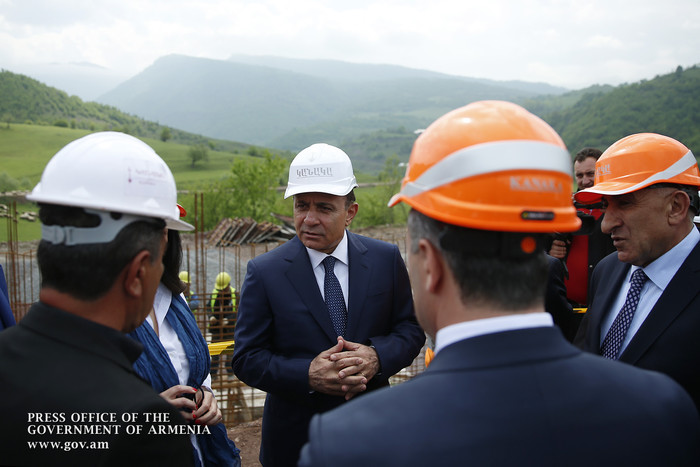 Prime Minister of Armenia Hovik Abrahamyan paid a working visit toTeghut copper-molybdenum mine, where he was briefed on the investment projects carried out by Vallex Group, which is the operator of the mine.

Talking to journalists, the Premier pointed out that the Company boasted 57% growth in the first quarter of 2016 and expressed the hope that the growth will be reflected throughout the year:

“Vallex Group has already produced 16 billion dram-worth output this year. The Company is facing financial bottlenecks due to the fall in the price of copper concentrate on the global marketplace. The Government is committed and there is also the President’s instruction to support this powerful company, which has a great future. Attaching importance to the development of mining industry in Armenia, we have expressed our support for other companies that have financial problems,” Hovik Abrahamyan noted.

According to the official website of the government, the Head of Government was told that over USD 350 million has been invested to ensure the launch of the first phase of the project. In the period between December, 2014 through April, 2016 the Company has mined and processed over 8.8 million tons of ore and produced 141 thousand tons of copper concentrate of 27.89 percent copper content. Some 1,200 people are currently employed in the Company, mainly from Teghut, Shnogh and other communities of Lori Marz. The average salary was AMD 352 thousand As of March 2016. In 2015, the total amount of taxes paid by the company amounted to AMD 2.5 billion, while in January-April, 2016 it has reached the mark of AMD 4.55 billion.