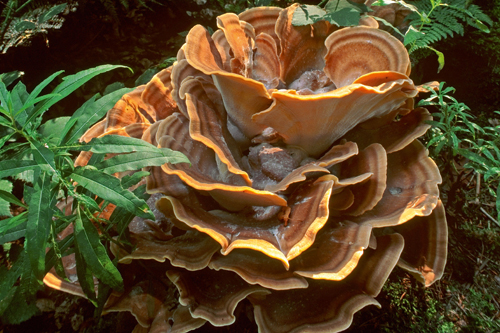 Brief description. Fruit body is 0,5–0,8 m across, globose, consisting of numerous branched fan–shaped caps on short stipes, which are attached to convex, thickened bulbous main stipe. Caps are hemispherical, imbricate, fleshy. When dry it is woody, the surface is brownish or light brown, wrinkled, with minor scales without shine. The margins are wavy. Flesh is firm fleshy with light colouring. When cut it fastly darkens getting black colour. It has specific mushroom odour. Tubes are short up to 6 mm long. The pores are white or greyish, small, the average 3–4 pores on 1mm, round with fine fringes. Spores are 5–6 x 4,5–5 µm, wide ellipsoid, almost spherical with one drop of oil.

Distribution. Generally in Europe, Asia, North America, Southern Caucasus (Georgia, Armenia). In Armenia it is discovered in Ijevan floristic region – in "Dilijan" National Park, in the surroundings of the towns Shamshadin and Noyemberyan.

Ecological, biological and phytocenological peculiarities. In Armenia it is rarely met, mainly in large groups in the lower parts of beech and oak trunks, in broad–leaved forests, on the altitude of 1200–1800 m above sea level, from September to October. Xylotrophic fungi, caused white rot.

Main factors of endangering. Limited distribution, loss of the biotopes, degradation and breakdown of ecosystems, degression of forest areas caused by uncontrolled felling.

Nature conservation measures. In Armenia it is conserved in corresponding ecosystems of "Dilijan" National Park. It is necessary to carry out monitoring of the state of discovered populations and discovery of new habitats.