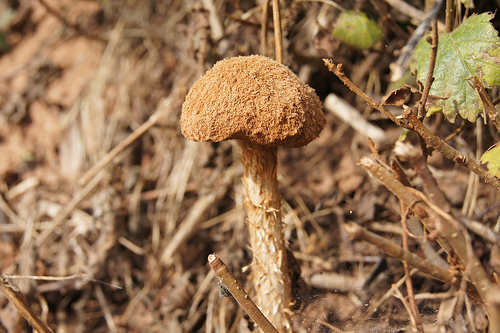 Brief description. Fruit body is 5 cm across, at first ovoid, closed, when mature collapses and remains in the lower part of the stipe as volva: mainly under the soil. It has double–layer membrane. Exoperidium is whitish, leather–like, fastly disappearing. Endoperidium is scaly, scaly– fibrous, attached to the woody stipe. When disrupt it is bell–shaped, smooth. Stipe is 15–20 cm long and 1cm thick, hirsute, brown. Capillitium is colourless, consisting of thin filaments. Spore print is rusty. Spores are 4–6 µm, globose, brown or light greyish.

Distribution. Generally in Europe, Asia, America, Southern Caucasus (Azerbaijan, Georgia, Armenia). According to paleontological data it is belongs to the relict species of Cretaceous period. In Armenia it was discovered in Lori floristic region in 1915 – in the surroundings of Akhtala. (Herbarium material was not preserved).

Ecological, biological and phytocenological peculiarities. It can be found on sandy clay soil, sandy soil, in semi–deserts in September on the altitude of 800 m above sea level. Saprotrophic fungi on humus or psammotrophic on sandy.

Nature conservation measures. It is necessary to examine extent of occurrence and to discover new biotopes.