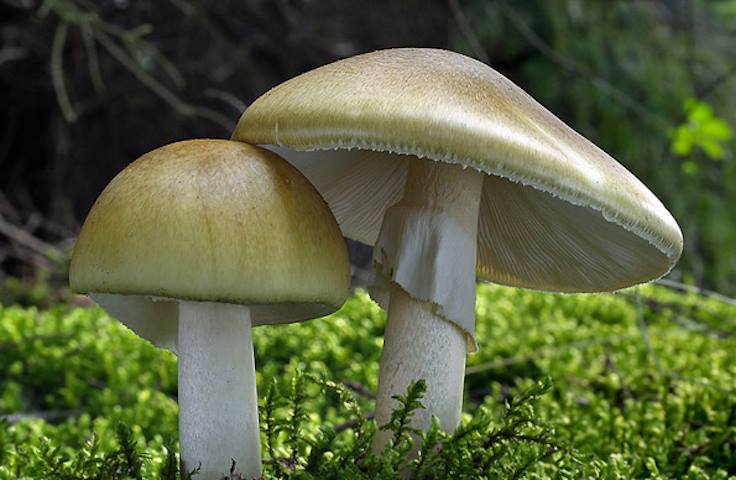 Brief description. Cap is from 5 to 15 cm across, olive–coloured, greenish, whitish with darker markings in the centre, hemispherical, smooth with radiating fibres and with remnants of volva. Flesh, gills and stipe are white. Mature and dry fleshes have unpleasant odour. Stipe 6–12 x 1,5–2 cm long, has white membranous ring, it is convex at the base, with remnants of large, free saccate volva. Spore print is white. Spores are 8–12 x 7–9 µm coloureless, broadly elliptical to subglobose, smooth, amyloid.

Distribution. Generally in Europe, America, Australia, Africa, New Zealand, Asia, Southern Caucasus (Azerbaijan, Armenia, Georgia). It is widely spread in many countries of the world, but in Armenia it is rarely met and in unique individuals. In Armenia the unique fruit bodies of this species are discovered in Lori floristic region – in the surroundings of Stepanavan city, in Ijevan floristic region, in Zangezur floristic region and in Aparan floristic region.

Ecological, biological and phytocenological peculiarities. It can be found in the soil in broad–leaved, coniferous and mixed forests on the altitude of 1100–1800 m above sea level, from July to October. Mycorrhizal fungi, with the coniferous and deciduous trees, generally with oak. This fungus is deadly poisonous. It is used in medicine.

Main factors of endangering. Intensive forest use, loss of habitats caused by uncontrolled felling in Armenia.

Nature conservation measures. In Armenia it is conserved in corresponding ecosystems of "Dilijan" National Park. It is necessary to carry out monitoring of the reserves distinctive habitats of the species.