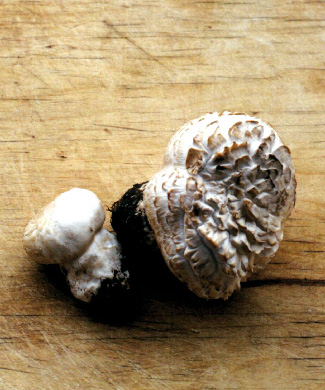 Brief description. Cap is from 5 to 25 cm across, white, white greyish, when touched turns yellow. It is thick and fleshy, hemispheric, then spread, sometimes flat in the centre covered with pyramidal or tabular squama. Edges are plicated or smooth and are often with partial remnants of the volva. Flesh is white, pink when cut with pleasant mushroom taste and odour. Gills are narrow, at first pink eventually turn dark brown, almost black. Stipe is from 4–5 x 1–3 cm long, white, whitish, central, velvety or glabrous with simple broad, whitish ring. Spore print is dark brown. Spores are 6,5–9 x 5,5–7 µm brown, large ovoid.

Ecological, biological and phytocenological peculiarities. It can be found on the soil, in the upper mountain belt – in the alpine meadows, in pastures on the altitude of 2500–3500 m above sea level in June and July. Saprotrophic fungi on humus. Fruit bodies are edible.

Nature conservation measures. In Armenia it is conserved in corresponding ecosystems of "Sevan" National Park. It is necessary to take measures for monitoring the state of the discovered populations and for discovering new cultivation places as well.